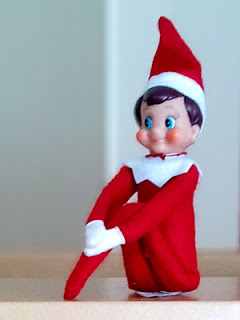 Hey, Elf on the Shelf, c’mere, I want to tell you something. Now I know your “boss” forbids you from talking to me, but it’s been made very clear that you can listen, so you better listen and listen good, you backstabbing bastard. Where I come from, snitches get stitches, so if you think I’m just gonna let you sit there all smug on your shelf knowing that as soon as I go to bed you’re gonna race off and rat me out to Santa, you’re even dumber than you look. And that’s saying something.

Just who the hell do you think you are, anyway? People are nice enough to invite you into their homes, and you repay them by what? Informing on them? How do you sleep at night? Oh, wait, that’s right. You don’t. You’re too busy spilling your guts to the big guy, you two-faced sack of shit! But that’s all about to change. You see, I’m not the only one sick of your shenanigans. Word on the street is if you don’t change your ways, you’re gonna wind up the Elf on the Slab, you pointy eared prick.

So if you don’t want to be “accidentally” run down by a runaway Hess truck, you better start minding your elfin business!  Capisce? Now, no one’s asking you to lie to Santa, they’re just “suggesting” you to stop the snitching. That shouldn’t be too hard, right? I’m sure you must have better things to do with your time. Wouldn’t you rather be painting stripes on candy canes or making toys with the rest of your little buddies? What do you get out of spying for Santa, anyway? Free lederhosen?

You know, you’re starting to look a little nervous. What’s wrong? Does Santa have something on you? Did one of your elvin friends rat you out? Or is Santa blackmailing you for some indiscretion at the office Christmas party? C’mon, you can tell me… 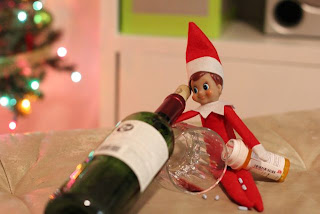 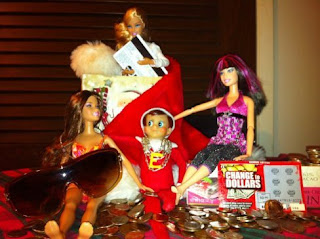 Fine, just sit there. See if I care. But so help me, if I wake up tomorrow and you’re not still sitting there, we’re gonna have problems.  What I do during the day is MY business. If Santa is so concerned about my behavior, he can get off his fat ass and check on me himself. But as far as he knows, I’m Nice. And I plan to keep it that way. Even if that means I have to keep you here. Do we have an understanding?

I can’t tell from your blank expression, but I trust this little talk has been enlightening.  Regardless of what you may have seen, I’m really not such a bad guy, and I actually get along rather well with the rest of your ilk. Me and the Keebler elves are pretty tight, I’ve spent a lot of time traveling with my gnome, and the Tooth Fairy has always been respectfully treated. The difference is, none of them were snitches.  So learn from your brethren and be the better man. No one likes a rat.

Hopefully this will be the last we speak of this matter, but if you need further proof that I mean business, just take a look at that angel over there. She couldn’t keep her big mouth shut and got a tree shoved up her ass. So unless you want a shelf suppository, remember: What happens in my house stays in my house!
Posted by Mike Wood at 10:15 AM 5 comments:

That Feeling of Christmas 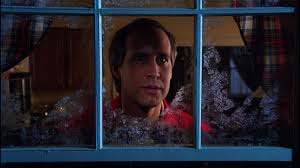 Every year there comes a moment where I remember why it is I like Christmas so much.  I never know when it’s going to happen – it might show up a few weeks before the big day, or maybe even a couple of days after. Sometimes it’s obvious and hard to miss. Others, silent and subtle. But it always manages to find me. It’s usually not in attic, even though I tend to spend an inordinate amount of time in there around the holidays.  And it’s definitely not in the mall, where I spend an incredible amount of money.
Sometimes it’s in church – either during the Christmas Pageant, when all the kids reenact the whole birth of Christ thing, complete with kids dressed as donkeys - or when the Children’s Choir sings “Silent Night” in the darkened hall, holding flickering candles in their trembling hands.  Both are very nice moments and can usually be counted upon for a goose bump or two.
Other times it’s gotten me at work – wrapping packages for needy families and accepting hand-made gifts, such as the ever-popular “paperweight” (aka chalk coated rock), from kids you know can’t afford anything else are both surefire ways to get the spirit of Christmas flowing.
And speaking of flowing spirits, I can always count on family (and the wine that comes with them) to fill me with cheer.  With so many “sides” to see, things get a bit hectic, but each stop usually provides a moment or two that make it worth the effort.  The food is always good (especially my mom’s walnut chicken). The presents are always appreciated (even Renee’s). And the music, whether it was Vera’s accordion-led sing a longs (RIP), Cousin Christina’s piano solos, or my own holiday Christmix playing in the background, is also a big part of the day.
But it’s typically during the quiet moments that Christmas finds me. Curled up on the couch, squinting at the lights of the tree. Finishing the last glass of wine after most of the guests have gone home.  Watching It’s a Wonderful Life for the hundredth time…
As I get older, the hustle and bustle of the holidays seems to get more stressful, and I wind up wishing I could just conjure the feeling for why we do it. With all the pressure and work that goes into “making” Christmas, I feel myself starting to get a little too anxious for it. I feel the need to go looking for it, but I know I can’t.  So I just go through the motions: buy the gifts, cut the tree, string the lights, wrap the gifts, decorate the tree, play the carols, clean the house, open the gifts, and a thousand other things in hope that the feeling will eventually arrive.

And while I don’t have faith in much, but I do have faith that it’ll come.
Posted by Mike Wood at 8:33 AM 8 comments: 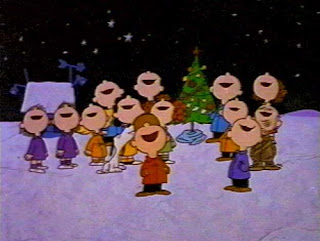 Whatever happened to carolers? Back in the day, my friends and I would gather and go door-to-door singing holiday songs for our neighbors. Most of them seemed happy to see us, and some even tossed coins or treats our way to reward us for our efforts. It was like a mini-Halloween, only with singing instead of costumes (though I’m sure my voice must have been pretty scary.)
But now, unless they’re some “professional” outfit wandering the malls, or a church group hitting the nursing homes, you never come across carolers. Or at least I don’t. So what happened? Are today’s kids too lazy? Or are their parents too afraid? Was there some anti-caroling campaign I missed?  Did Nintendo come out with wii Carol? I figure something had to happen, because with the popularity of Glee, and flash mobs, it would seem like more kids would be into this aspect of the holiday spirit. But they’re not.
Not that I’m complaining, mind you, as frankly, it’s pretty awkward to be standing in the door, letting all the heat out, while some out of tune urchins screech about Santa in his underwear.  But as a kid, it was fun. We’d steal the songbooks from church so we could practice, and then argue over our set lists. We’d giggle over words like “virgin” and “balls” and try to outlast each other with the longest peeeeee-eeeeeeace at the end of “Silent Night.” We demanded figgy pudding, implored people to come let us adore him, and exposed Santa kissing mothers.  And while very few of us could actually sing, what we lacked in talent, we more than made up for in volume.
And it seemed like we always had the perfect night, where the light of the moon would sparkle the lightly falling snow. We’d trudge up unshoveled walks, mash the doorbell with mittened hands, and start singing before the door was opened. Sometimes it never opened, but we always finished the song anyway. Then we’d go off to the next house.
We didn’t worry about lawsuits, or pedophiles, or interrupting an episode of “The Dukes of Hazzard.”  Our biggest concern was trying to remember if it was Nine Lords a Leaping or Nine Ladies Dancing. And maybe our neighbors were irritated by our intrusions, but they never let it show. Instead, they’d call for their husbands, ask if we took requests, and offer us some cocoa. And while we always tried to honor their requests, we never took them up on the cocoa. There was no such thing as to-go cups back then, and we had many other houses to hit and many more songs to sing before the night was through. The cocoa could wait until we got home.
Looking back, I suppose our caroling was pretty lame and corny, even by 70’s standards, so I can’t blame today’s kids for their lack of enthusiasm. But if there are any out there willing to give it a shot, my door is always (partially) open. I can’t promise caroling will make you the coolest kid on the block, but you will be the coldest!
Posted by Mike Wood at 5:42 AM 2 comments: 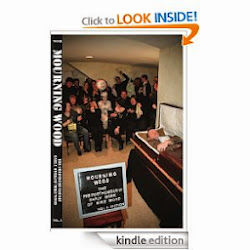 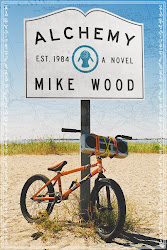